Readers of our previous posts in this series (part 1, part 2) should by now have a reasonable understanding of what a blockchain is – its rationale, and how it is created and maintained. For continuity, it is important to reiterate that a blockchain is a decentralized ledger (a record of any sort of information) where every node in a peer-to-peer network maintains a copy of that ledger. Even though nodes may go out of synch with their peers from time to time, the ledger is eventually made consistent so that there is a common agreement on its contents.

Blockchains differ from each other on the types of entries made to the ledger and how such entries are made, validated and confirmed by all the participants in the system to achieve the common and tamper-proof record. For public blockchains, the mechanisms should ensure that these properties hold even when the participants are not always available, known to each other and, perhaps most important, who may not trust each other.

We explained these points using Bitcoin as an example of a successfully deployed public blockchain that records transactions of that eponymous currency. In part 2 of our series, we also used the following architecture picture to separate out and describe the different components that make the entire Bitcoin system tick.

The Bitcoin blockchain is an example of a ledger that records transactions – the transfer of ownership of some token (e.g., bitcoins) from one participant (represented in Bitcoin by an address) to another. This is sufficient for Bitcoin as its purpose is quite limited – the need to create a record of pseudonymous ownership of the crypto-currency that is decentralized, validated and immutable. However, as can be imagined, many have come to see this as quite a limited use of the very powerful tool it created to effect this, and the infrastructure that has grown to support it. END_OF_DOCUMENT_TOKEN_TO_BE_REPLACED 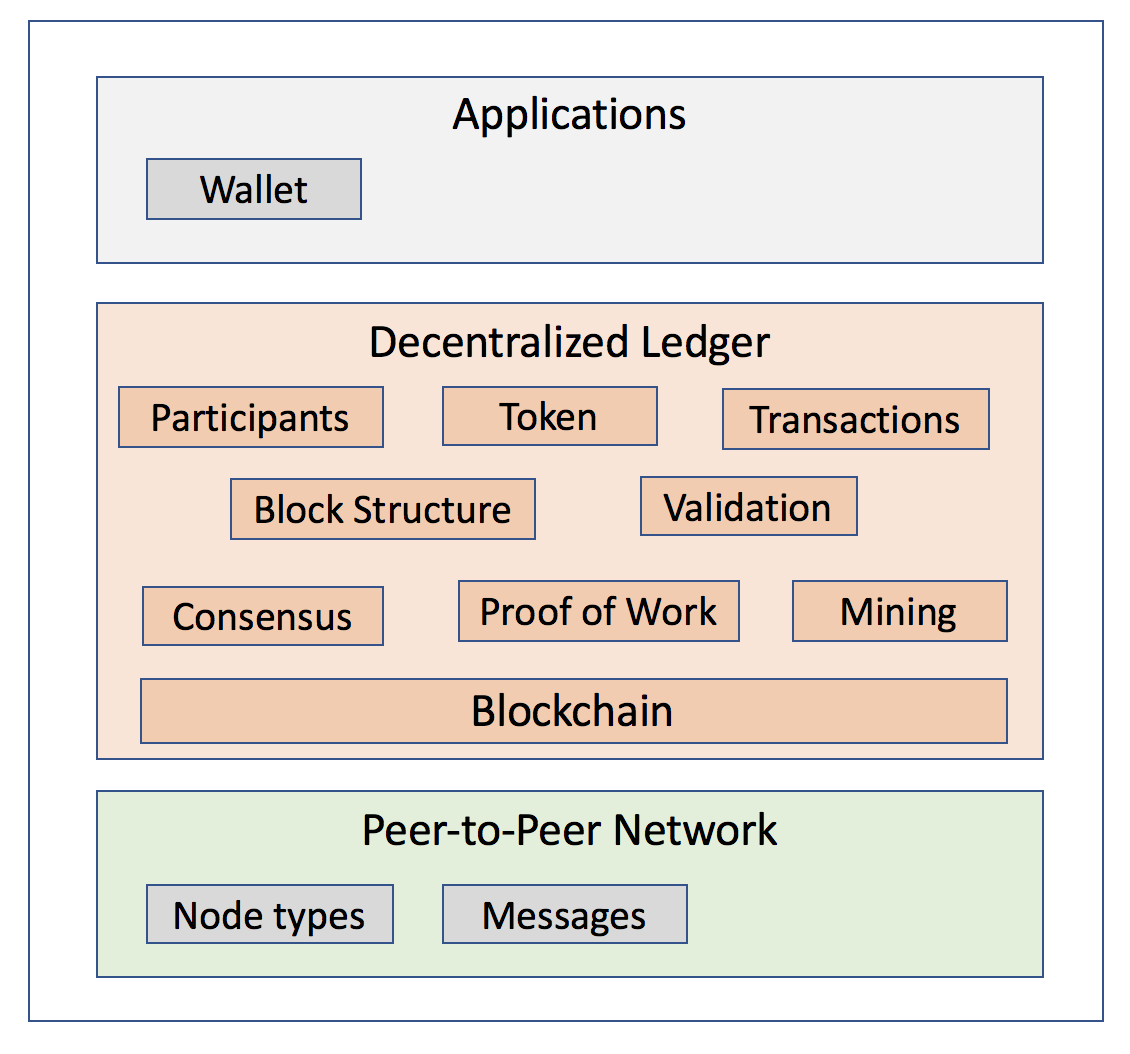 The top most layer represents Applications that can be built using the underlying Decentralized Ledger maintained on a Peer-to-Peer network. In the case of Bitcoin, such applications are very simple as the entire architecture supports one straightforward function – the exchange of bitcoins for commerce or speculation. An example is a Bitcoin wallet, created to represent a user’s unspent bitcoins. Blockchains such as Ethereum allow for more complex applications, which we shall discuss in our next post. END_OF_DOCUMENT_TOKEN_TO_BE_REPLACED

It is the rare person these days who has not heard of blockchains, if only vaguely and very likely in connection with its implementation in that sensational crypto-currency Bitcoin.  While Bitcoin has been around since 2009, its recent valuations and the speculative market around it have motivated many to try and better understand its inner workings and possibly mimic those to create alternative crypto-currencies. Having missed the Bitcoin boat, entrepreneurs and speculators hope they can get an early start on the next big thing.

The Bitcoin market momentum has led, in recent years, to a great deal of interest in the underlying technology – the distributed ledger called a blockchain, and the eco-system of peer entities that verify, maintain and grow it. Leading companies from different industries as diverse as banking, entertainment, transportation, education, government and many others have started to find in blockchains something that they can use to improve operational efficiency while cutting intermediary costs.

Recent news on the use of blockchains in the medical domain have caught our attention. We suspect many readers of the LuxSci FYI blog have also had their interest similarly piqued. However, such news items are almost always high level and offer very little insight into what is actually being done. To probe further requires understanding something about blockchains through its recent manifestations, particularly the version used in a system called Ethereum. (Ethereum, as we shall see in a later post, is an advance over the Bitcoin ecosystem, borrowing many of its architectural principles while expanding on the usage scenarios.)

To help our readers make sense of such news, particularly those related to the use of blockchain technology in a medical setting, we are providing a multi-part series of blog posts describing the blockchain, using examples of crypto-currencies such as Bitcoin and Ethereum to illustrate how it maintains an immutable record of the states of a system over time, and how new applications can be built on top of such systems.

At the end of this series of posts, having exposed the basic technical foundation, we will describe how blockchains are being used in various industry scenarios, especially medical ones as well as related areas such as identity management, auditable record keeping and data sharing. We hope that after reading these posts, our readers will be able to make better sense of news articles of the sort we referred to earlier.

This first post will describe the concepts behind a blockchain, using Bitcoin as the example. We will explain at a conceptual level, avoiding detailed technical descriptions in this post unless absolutely essential. The next post will fill in all the technical details. END_OF_DOCUMENT_TOKEN_TO_BE_REPLACED