As security and privacy become more prominent in the news, you’re probably starting to hear the term end-to-end email encryption a lot. But what does it actually mean? You may have a rough idea that it protects your data, but many people are vague on the specifics. However, it’s the details of end-to-end encryption that are the most important. After all, it only takes one false assumption to put your data at unnecessary risk. 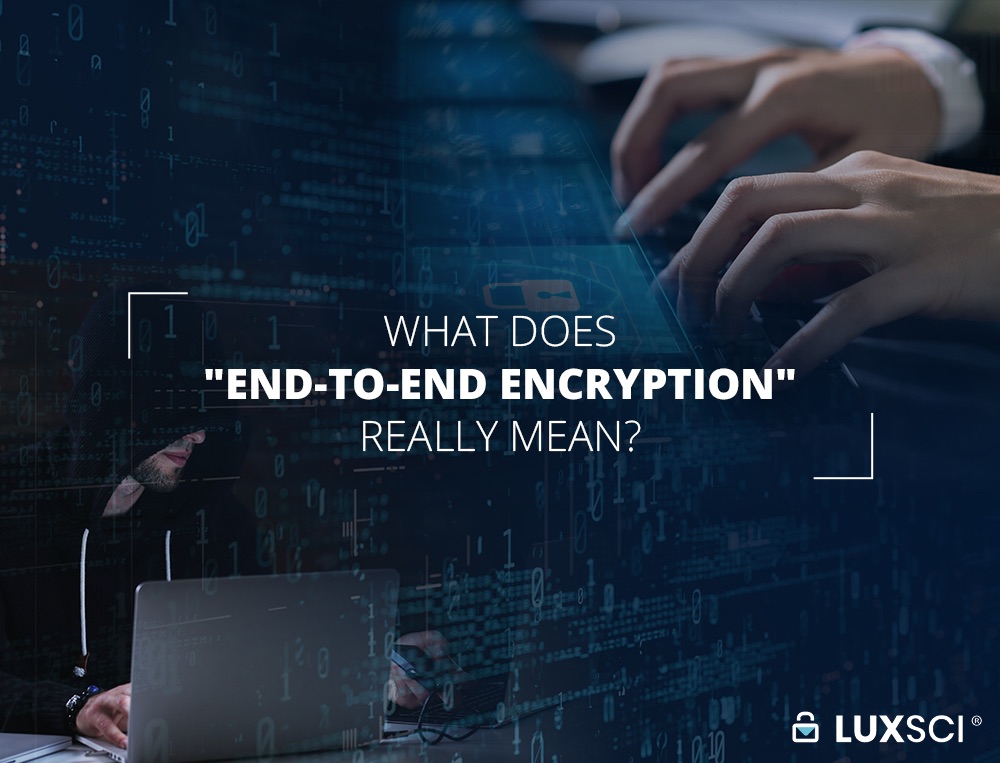 What Is End-to-End Encryption?

Traditionally, when data made its way across the internet, it did so as plain text. When you sent an email to a friend, it hopped its way across servers until it reached their inbox, but throughout the whole journey, the message contents were available to anyone who had access to the underlying infrastructure or network. This meant that service providers, the government, and hackers who penetrated these servers were able to read your messages (and even modify them). (See: The Case for Email Security for more detail.)

As we became more aware of just how bad this was for security and privacy, much of the internet started using TLS to encrypt data between clients and servers. While this was a huge step for online security, it did not provide protection for the whole journey.

TLS encryption terminates at the server, meaning that the service provider and anyone who has access to their systems can potentially access the data. After the data has been decrypted on the server, it is then encrypted again for its transit to the next server, before being decrypted upon its arrival once more. This process continues at each point, as the data makes the rest of the journey to the recipient, where it is finally decrypted so that they can access it.

End-to-end encryption takes these protections one step further by ensuring that the data can not be decrypted along the way — only the final recipient can open the message. It should be impossible for the organizations who own the servers and infrastructure along the way to access the data, because they do not have the keys.

With end-to-end encryption, the data is encrypted by an app on your device. Then, throughout its whole journey across the internet, all the way until it reaches your recipient’s device, it is protected. This prevents any parties from accessing the data while it is in transit, while in storage, or while in the active memory of servers along the way.

What End-to-End Encryption Is Not

While end-to-end email encryption is a great way to protect data in many circumstances, it is by no means the ultimate security solution. There are still significant ways to circumnavigate end-to-end encryption.

When end-to-end encryption is implemented properly, it is almost impossible for the data to be accessed along it’s journey. But that doesn’t mean that end-to-end encryption solves all data security problems. While it prevents a lot of threats, it cannot protect data if the endpoints aren’t secure.

This means that if attackers have compromised your phone or computer, they may be able to access the data before it is encrypted or after it has been decrypted. Hackers may insert spyware on your device, allowing them to access the data when it is no longer in an encrypted state.  These days, security is really improving across the internet. If an attacker wants to go after someone’s information, they likely are going to go “where the plain text is.” This means that attackers are much more likely to compromise end user devices and leverage those for data exfiltration, ransomware, and cyber espionage, than they are to try to go after data in transit, where it is very much harder to penetrate even without end-to-end encryption.

When email is sent via TLS, it is encrypted in each hop of its transit, but decrypted whenever it reaches a server, just as we described above. Email that uses “Portal Pickup” is encrypted during transit and at rest, but it is decrypted in the web application (“the portal”) software when the message is created and when it is read by the recipient.

Neither of these techniques are considered end-to-end email encryption—in Portal Pickup’s case, this is because the data is decrypted in the web application, rather than only on the recipient’s device. However, both of these techniques can still provide a high level of security in the right circumstances.

Systems like S/MIME and PGP encrypt data from end-to-end when they are set to encrypt emails on the sender’s device and only decrypt them when they reach the recipient’s device. However, when you leverage a web interface or security gateway device to perform your encryption, then the S/MIME- and PGP-encrypted messages are not really end-to-end encrypted.

Common messaging applications like Signal and WhatsApp (and even Apple iMessage and FaceTime) are end-to-end encrypted, because data is encrypted and decrypted on the sender and recipient’s device, respectively.

Is End-to-End Encryption Suitable in All Circumstances?

For example, full end-to-end encryption for your email would force you to go without or severely limit:

Beyond these items, use of end-to-end encryption technologies for email also generally imposes costs on the recipient to perform special actions or to set up special software in order to access the messages. This usability cost may be only warranted when communications are frequent or when the message is exceptionally sensitive.

Does Your Organization Need End-to-End Encryption to Protect Its Emails?

You may have been enthusiastic about the security of end-to-end encryption, but after considering everything that you would have to give up, you’re probably wondering if the trade off is really worth it.

Thankfully, in most circumstances, organizations do not need this level of encryption. End-to-end encryption is not required for HIPAA compliance or for other major regulatory frameworks. Perhaps counterintuitively, in many circumstances, implementing end-to-end encryption would actually hinder implementing many mechanisms that are required by these frameworks (such as emergency access, archival, and various kinds of filtering).

While end-to-end encryption isn’t necessary outside of a narrow set of circumstances, that doesn’t mean that organizations get a free pass. When it isn’t used, businesses need to place more trust in their service providers, because they have to rely on another party’s security mechanisms and policies to keep their own data safe. Security audits such as HITRUST and SOC can help you determine which organizations have demonstrated that they have suitable protection measures in place.

Ultimately, the choice to use end-to-end encryption or not is about balancing security risks, against being able to perform the tasks necessary to run your business effectively and to meet your compliance requirements. If you engage a trusted and secure partner, your organization should find a good balance between the two.

At LuxSci, we provide a full range of email encryption options; from TLS and Portal Pickup to server-side S/MIME and PGP, to end-to-end encrypted S/MIME and PGP. This allows our clients to choose whichever options best suit their unique needs. They can even select the desired level of encryption on a per-message basis, or configure the appropriate email options according to each sender or recipient.

While most of our clients don’t need end-to-end email encryption across the board, they can still choose it in situations where the security benefits outweigh the functionality issues. If you are unsure about which option is best for your organization’s circumstances, talk to our team to find out what’s right for you.

This entry was posted on Tuesday, January 26th, 2021 at 7:44 am and is filed under LuxSci Library: Security and Privacy.