Looking Ahead: 3 Cybersecurity Predictions for 2022

We’ve been busy crunching the numbers and analyzing industry trends to bring you our cybersecurity predictions for 2022. Here’s what you should expect in the following year: 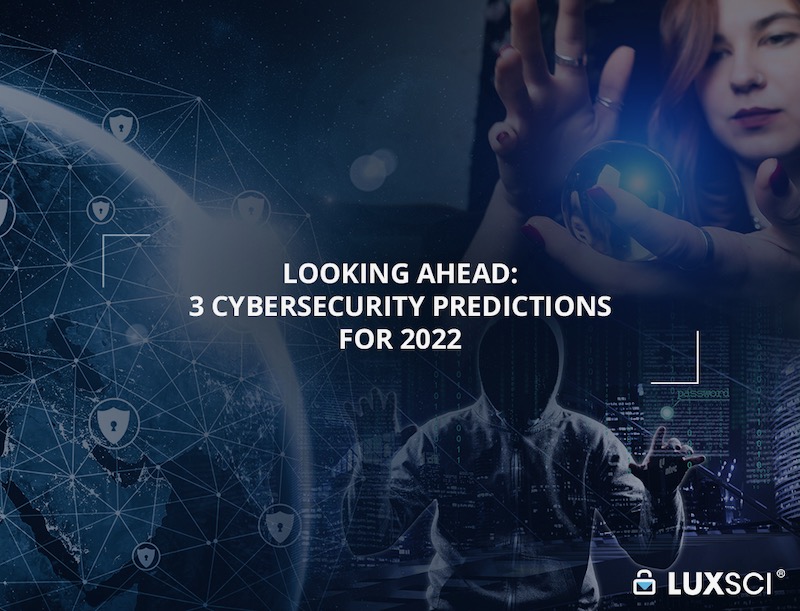 In 2021, researchers from McAfee and Culinda identified five new vulnerabilities in the B. Braun Infusomat Space Large Volume Pump and the B. Braun SpaceStation. These pumps are used in both adult and pediatric medical treatments. Attackers could abuse the vulnerabilities to deliver additional medication doses, potentially leading to fatal overdoses.

While cyberthreats have slowly been gaining more attention in recent years, there have been few cases where they have been linked to patient deaths. These types of medical devices are tremendously useful for treating certain conditions, but their potential abuse opens up a whole new can of worms.

Direct hacking of these devices isn’t the only thing that we have to worry about. Just the possibility of a hack could result in a wave of scams. Cybercriminals could reach out to medical device owners and tell them that their device has been hacked. They could threaten the victim that unless they pay up right now, they will deliver a fatal overdose.

Given what is at stake, scammers could extort money out of device owners who hadn’t actually been hacked at all. As long as the threat seems credible, many victims would likely pay up rather than face the risk of their own death.

Interference in previous US elections has shown just how vulnerable the nation’s democracy is to foreign meddling. While much of this online activity has involved troll farms spreading false information, cyberattacks have also left their mark.

The most notable were the attacks against the DNC and the Clinton campaign ahead of the 2016 presidential elections. The email leaks created a massive scandal that generated negative news coverage.

While it’s hard to say whether or not this affected the ultimate result, it is clear that a foreign actor could hack the communications of political candidates. Unflattering or misleading information could be released to the public in an attempt to sway voters. Depending on the specifics, voters could cast their ballots for another candidate, undermining the democratic process.

Voting systems and databases were also hacked in 39 states during the 2016 elections. While there is no evidence that votes were changed, the attackers accessed voter information and penetrated these systems. Electoral cybersecurity has improved since 2016, but it does not rule out the possibility of attacks that call the validity of the election outcome into question.

While the 2018 midterms didn’t see as much meddling as the 2016 presidential elections, there was still some interference. It may come as a surprise that the 2020 presidential elections were relatively free from cyberattacks. However, this does not mean that there weren’t misinformation campaigns that attempted to sway the result or sow distrust.

Cyberattacks against US elections may have decreased in the past few years, but that does not rule out their possibility during the midterms. Given what is at stake, it is important for the nation and its security agencies to stay vigilant.

3) Telemedicine is Here to Stay

The pandemic turned the world upside down in many ways. The need for isolation and social distancing caused many to turn to telemedicine rather than visit medical practitioners. Analysis from McKinsey Insights showed that telemedicine for outpatient care and office visits peaked in April 2020.

In these relatively early days of the pandemic, telemedicine usage was 78 times higher than just two months previously. By February of 2021, it was back down to 38 times higher than at the same time the year prior, which is still a remarkable increase.

Our cybersecurity prediction for 2022 is that we will continue to see telemedicine used at much higher rates than in a pre-pandemic world. Now that many people have tried it, they appreciate its convenience for medical consultations where they don’t have to be physically present.

Despite the benefits of receiving medical treatment at home, telemedicine is not without its risks. It requires secure communication channels to protect patient data. Many regulations were waived at the start of the pandemic to enable easy access. However, organizations should not ignore their obligations under HIPAA. It’s been a challenging few years for the healthcare industry, but protecting patient data should not be neglected.

LuxSci offers a range of HIPAA-compliant communication tools such as Secure Email and Secure Text. Contact us now to see how we can help your organization protect its patient data and stay on the right side of HIPAA regulations.

This entry was posted on Tuesday, December 28th, 2021 at 9:00 am and is filed under LuxSci Library: Security and Privacy.