Why isn’t a Blackberry Secure Enough for Barack Obama? 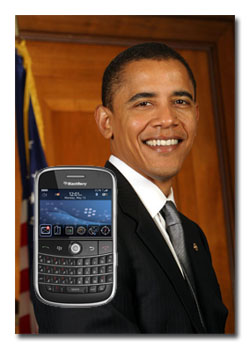 As you may have heard, Barack Obama is tethered to his Blackberry.  It’s great to have a highly technical President of the United States, but it is really shaking things up.  All of the policies and procedures date back to times before PDAs and smart phones.  Obama is really struggling to cling to the same technical edge in his day-to-day affairs that he has enjoyed to date. But the security team at the Oval Office has other plans.

No Blackberry for Obama!

Instead, he gets what is being dubbed the “BarackBerry” — a high security blackberry replacement.  Why is the Blackberry (and similar devices) such a security concern?

The Secret Service’s Likely Concerns About the Blackberry

We have not actually interviewed the Secret Service to get the first hand story.  Here is what we have gleaned from various news and our own expertise in this area:

How real are these security issues?  Probably not as bad as they seem.  The heads of the FBI, the head of the CIA, and the Joint Chiefs of Staff are all going to have Blackberries (although all with an added “super-encryption package”, says Marc Ambinder in his blog).  The standard is always higher for the president.  However, I think that the issues involving Presidential Records are the most significant.

This is a term we first saw on CNNPolitics.com.

In Marc Ambinder’s blog for The Atlantic, he announced Barack Obama’s new “Blackberry”. This is the Sectra Edge from General Dynamics special $3,350 smartphone that’s:

“…certified by the National Security Agency as being acceptable for Top Secret voice communications and Secret e-mail and Web sites.”

Apparently, no one at the NSA, the White House, or from Obama’s circle are commenting on this. However, we can assume, after all the commotion, that this is:

So whose job it is to read all of Obama’s email archives?  You know someone at the NSA is probably already doing that for national security reasons.

So, Obama gets his Blackberry, kind of, with one thumb tied behind his back.

2 Responses to “Why isn’t a Blackberry Secure Enough for Barack Obama?”