SMTP TLS (Transport Layer Security for email delivery) is a mechanism email servers can use to pass email between themselves in a secure manner. In essence, two servers which both support TLS first establish an encrypted channel of communications and then they pass email through it, ensuring that the messages are secured during transmission between the servers, even if the messages themselves were not already encrypted.

SMTP TLS is great when your recipients email servers support it. However, some recipient's servers do not (how to tell, TLS support checker tool) — for these, other modes of SecureLineTM, such as Escrow, will be automatically used when encryption is required.

All messages sent by all LuxSci users (including those not using SecureLineTM encryption) always employ "Opportunistic TLS", unless "Forced TLS" is in use.

Forced TLS
Email message is delivered to the recipient server over a TLS-secured channel if the recipient server supports it. Otherwise, the message is automatically sent via Escrow or PGP or S/MIME to ensure that the message content is never delivered insecurely.
TLS Exclusive
A LuxSci-exclusive TLS sending feature. TLS Exclusive is just like Forced TLS, except that messages that can't go TLS are just dropped. This is ideal for low-importance email that must still be compliant. E.g., email marketing email in healthcare. In such cases, the ease of use of TLS is more important than the actual receipt of the message.

With SecureLineTM, you can take advantage of the simplicity of TLS encryption when it is possible and know that security will "fall back" to another method when it is not possible or when the recipient's servers no longer support it.

When communicating with many companies (such as banks), "Opportunistic TLS" is insufficient. These organization REQUIRE you to never send them email if it is insecure, even if that is because their own servers are broken. "Forced TLS" handles this.

If you communicate with an organization, like Bank of America, that requires enforced TLS (but where you do not otherwise need to use SecureLineTM encryption services), LuxSci can ensure that all email to that organization goes over TLS or is never sent. SecureLineTM licenses are not even required for this — only an official request for that from your recipients.

Get the HIPAA eBook 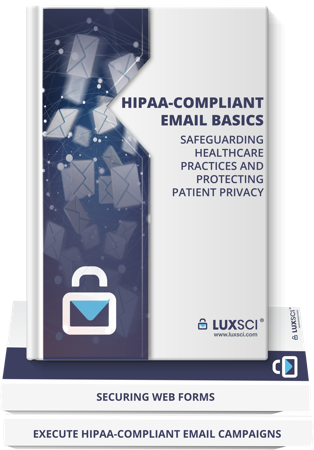 I spent weeks scouring the Internet for companies that offer a complete set of secure email services - HIPAA compliance, secure IMAP, and secure SMTP in particular. LuxSci provides the most comprehensive security offering that we have found. LuxSci takes email security very seriously. I would recommend them to anyone interested in security, confidentiality, and privacy in their email communications."