The Beginning of the New LuxSci Interface

LuxSci is in the process of re-imagining and re-inventing the major components of its web-based user interface …. from the ground up.  We are taking some of the most important feature requests from our customers, together with the newest technologies that have matured over the past few years, and re-designing these major components to be simpler, faster, modern, and slick.

The first phase of this process involves a complete re-vamp of our WebMail email composer tool — probably the single most used tool in the entire WebMail interface.  We have:

Additionally, along with changes to the WebMail composer, we have updated many other small user interface elements and libraries to support these changes and planned changes.

Here is a screen shot of what this composer can look like: 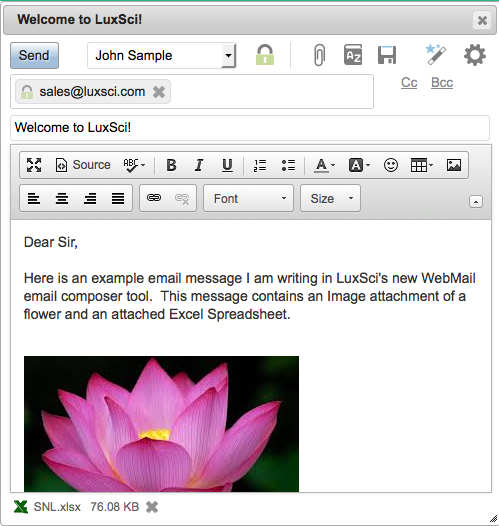 Some of the features of this concise interface include:

Almost all of the features of the old LuxSci WebMail Composer remain, but are now streamlined.

Try it out in Beta

The LuxSci WebMail redesign is so pervasive, that we are doing it in phases and releasing each phase as a “Beta Preview” so those who are interested can try it out before it goes “live” and becomes a new standard part of the LuxSci interface.

To try out the current Beta version of LuxSci, simply login to:

using your regular LuxSci username and password.  Use this beta site at your own risk. By the very nature of “Beta” software, it may contain bugs and issues that could affect the integrity and/or security of your data.  For example, for security reasons, we are currently restricting HIPAA compliant paid accounts from logging into the Beta version of LuxSci.   You may request a Free Trial to test the Beta.

If you do use the Beta site and find a bug or have a suggestion, please make a Support Ticket and our development staff will review.

LuxSci has a long list of things that it plans on revising in successive phases over the next 6-12 months.  These include:

Each one of these is a significant project to redesign and updates will be made available via the Beta site for each phase as they are ready.  Check our FYI Blog, Facebook, and Twitter for announcements.

Welcome to the beginning of the new LuxSci!

beta compose webmail
This entry was posted on Tuesday, June 24th, 2014 at 9:49 am and is filed under New Feature Announcements. You can skip to the end and leave a response. Pinging is currently not allowed.